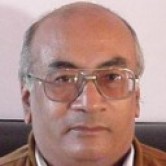 Can the emptiness
eavesdrops to its own words
by its ears lucidly –
in the darkness wrapping its room,
in the sound of beating its ear,
in the breathing in and out,
in the sight shimmering its eye,
in the taste arousing its tongue,
in the wrinkling its body by the winds ,
in the kissing bloom by the breeze and
in the leaf falling out of the tree?

Rhyming a moment the song of the morn
set just the morning sluggishly
in the greenery of the clear and clean forests
revealed the soaring pitch concealed in it.
May divulged it either
in the heat of thundering clouds or
in the frost of the freezing storms?

In the disease of alarming itself
by the severe wounds
bemused account at the spot
for a pretty long period
broadening and spanning
that never bringing to light in the eyes
may be already stolen by someone,
Yes ! It’s because the emptiness there.
*